IT4nextgen > How To > How to Refill laser Printer Toner: Step by Step Instructions

Before you start refilling the toner cartridge, it is important to buy quality toner ink. Be prepared with a star-cut screwdriver, a newspaper sheet or any waste sheet, soft cloth, any sharp-edged driver, and a quality toner ink bottle.

Step-1.  After pulling the toner from a laser printer the first step is to open the screw of the side cover as shown below: 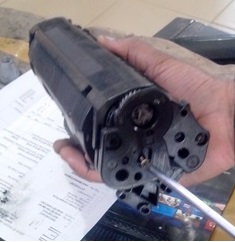 Step-2.  Now take the side cover off:

Step-3: After you have taken outside cover, the next step is to take out the drum unit. Hold it from a white portion(gear) and pull it in the direction instructed.

Step-4. This is how the laser toner cartridge will look after plugging out the drum unit:

Step-5. Now you need to plug out PCR roller as shown below:

Step-6. Slightly push PCR rod to right-side with some sharp-edge tool and then move PCR slightly upward and take it out leftwards
Step-7. The next step is to separate the waste unit and ink unit, which are joined together with the help of pins. So you have to take out the pins which are on both sides of the cartridge.

Step-8. After pushing the pin from inside, it’s time to get it out from the outer side since it has plunged out after being pushed from inside as you can see in the picture below.

Step-9. After you remove pins from both sides of the toner cartridge, you have to remove a spring as shown:

Step-10. The next step is to set-apart two main units of the cartridge. One unit is a waste unit and the other is called an ink unit. Hold the toner as shown in the picture and pull both units apart.

Step-11. View of Waste Ink Unit and closer view of Spring which is to be removed to open waste ink unit.

Step-12. Remove spring and then remove the plastic cover as shown:

Step-13. Now remove the screws of the waste unit to get apart the wiper-blade and then remove the waste-Ink which was collected in this unit.

Step-14. Now that you have managed to open up Wiper-Blade , you should clean the waste collector unit and Blade part. Wiper-Blade should be cleaned with a soft cloth and not with a brush as the brush can put scratches on the blade.

Step-15. Next, you have to re-assemble the waste-unit part. First, fit the wiper-blade and then the plastic cover as shown:

Step-16. Re-fit plastic cover so that it fixes into the cut/groove as shown:

Step-17. Now Fit the spring back to its position as shown in the image below.

Step-18. Now what you have done so far is that you have opened the waste ink unit, cleaned it, and then closed that unit. Now begins the main part that is to refill the laser printer toner cartridge. So now, take the other unit where the ink resides. Open it and fill the Ink (dry) in it then close it and finally re-assemble the two units which were separated earlier.

Step-19. After removing the side cover, you can see a white plastic cover, you have to remove this and fill here the toner-ink:

Step-20. Remove white plastic cover, now you are ready to refill the toner but before that do not forget to “Shake the Ink Bottle before use”. After removing the cap of the bottle you can apply a plastic nozzle cap which you normally get along with a bottle or you can ask for one from the vendor.

Step-21. Now it’s time to refill and close the cap as shown below:

Step-22. Now you have to join together the two units i.e Waste-Unit and Ink-Unit as shown below: Make sure to align them as shown in the directions mentioned below:

Step-23. The next step will be to RE-Insert PINS (remember..!!!!) you plugged out from both sides.

Step-24. Now after you have inserted pins (with hands ,no tool required) , it’s time to insert PCR roller as shown below:

Step-25. Time to install Drum-Unit back to its position i.e onto drum holding pin :

Step-26. After Re-installing the drum, Fit the side cover.

I hope you will be able to refill laser printer toner easily by following the above steps. In case you have any queries you can ask us by posting your question in the comment box.