In a computer, all the programs are stored on a hard disk drive. Whenever you access any program, it is temporarily stored in the memory called RAM(random access memory) so that the CPU accesses this software quickly. Apart from RAM, there are different types of memory and have their own roles in computing. Let’s explore different types of memory and their functionality.

Computer Memory is of Two Types

A memory that is not affected by the absence of electricity is a permanent memory and the data stored in it remains intact even if it is moved from one place to another. On a motherboard, it is present in an Integrated chip, also called ROM or BIOS. All the information about the motherboard, booting instructions, and functions are stored in BIOS at the time of manufacturing.

Permanent memory is of 4 types.

ROM (Read only memory). ROM, once manufactured cannot be changed. It is the static form of permanent memory. A commercially available movie or software on a CD-ROM is a good example of Read-Only-Memory. You cannot change the contents once the data has been written to it.

PROM (Programmable Read Only Memory). The hardware chip that can be programmed once is called PROM. Special Programmable kits are used to program the electronic chips. A common example is burning(writing data) on a CD-ROM or a DVD at home.

EPROM (Erasable Programmable Read Only Memory). This type of ROM has a small window on its top. If this window is exposed to UV light for a specific period of time, all the previous data is deleted. You can re-program it after the data has been completely removed.

EEPROM (Electrically Erasable Read Only Memory). This is the most used type of permanent memory. You can easily erase the data with a software program. BIOS on the motherboard is an example of EEPROM.

RAM (Random Access Memory) is another name for temporary memory. It is called temporary since all the data stored in RAM gets erased once the power is off. RAM is used to hold and execute the data or the instructions. Whenever we work on the computer, actually we are working on a RAM and it’s only when we press save button the data gets saved in permanent storage like a hard disk.

On a motherboard, a RAM is present is PCB modules as shown in the figure below.

Different types of RAM modules are shown above. You can differentiate these RAM modules by the CUTS on golden pins on the lower side of each module. Just notice that each type of RAM module has a cut or a notch on different positions along the length. RAM modules have been aligned vertically according to their date of origin and speed. Like SIMM modules were among the first type of memories to come and DDR4 RAM modules are the fastest and latest memory types. All the above type of RAM’s are Dynamic RAM’s. 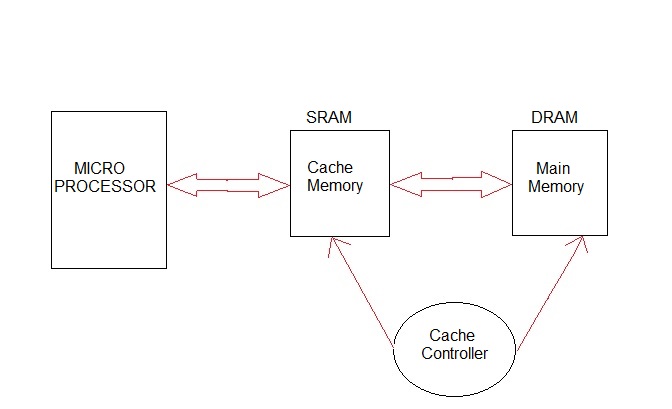 Cache memory is just like another memory that stores the data. Although all the programs, documents or other media files you access in a computer runs in RAM but to make the processing more faster, the processor, instead of searching for data in main memory(RAM), it reads the data from cache(SRAM). The SRAM which consists of FETs has high speed compared to RAM which is built on capacitors.

The ROM  functions relatively slower than RAM. So it takes a longer time to access codes from ROM than from RAM. In order to speed up the ROM processing, the codes of ROM are copied in a region of RAM and are write protected. This way the system now can access the ROM codes from RAM at a much higher speed. The region of RAM where the ROM codes are copied is called shadow RAM.